This was a site specific performance at the 5000 year old man made earth formation Silbury Hill in the village of Avebury in the West of England. Part of the Stone Henge Unesco World Heritage Site.

The man-made monument was constructed using layers of chalk, clay and gravel. Archeologists calculate it would have taken approximately 18 million man hours to build, equivalent to 500 men working for 15 years.

No one knows why ancient communities went to such trouble to build this monument or what purpose it had, theories postulate that it was used as a way to honour life or women – that it represents a pregnant women reclining or the fertility of mother earth herself.

The wearable art piece is futuristic in its look and appears out of place in the ancient natural surroundings – a reminder of how disconnected with nature we as humans have become. The skirt echoing the mound as though it would fit perfectly if placed back on top, united with the earth once more.

The complexity and duality of being female are emphasized in the use of materials, the cold hard metal worn against soft skin. Symbolic of the warrior strength women can muster when needed yet having ownership of great empathy and compassion.

The wearing of a crinoline and corset in the past in public would have been seen as a true state of vulnerability here the exposed nature of the garments act as a suit of armour. Look but don’t touch….

Joanna was Awarded UK AND EUROPEAN DESIGNER OF THE YEAR in 2014 with this work at the World of Wearable Art International Competition in New Zealand.

The work is now in the Permanent collection of the
World of Wearable Art Museum in New Zealand. 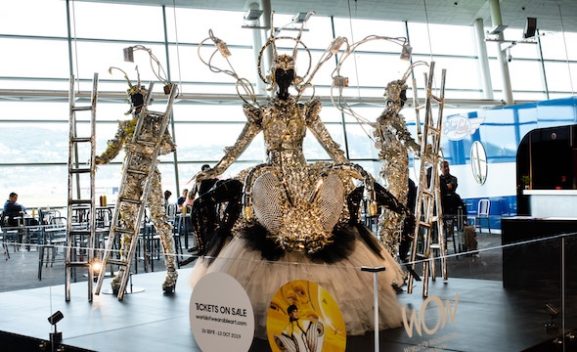